Of the area I moved from recently:

This coffee shop was in my neighborhood. Worse still, many customers are the Pittsburgh City Police. Gee, this place has had? a coffee card with Trump and Conservatuves pictures on it, and with a purchase, they’d punch it to look like bullet holes in their heads. 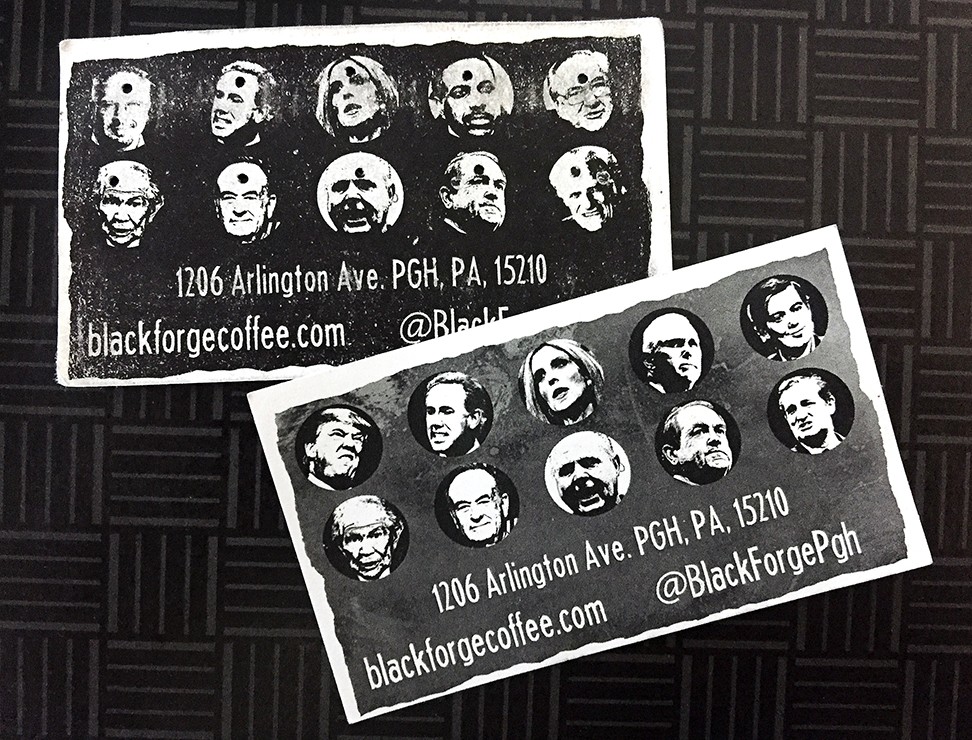 Black Forge is located right next to the Pittsburgh Police Zone 3 headquarters, and Ms. Corts said that officers, who are among their regular customers, have shown support and found the cards amusing. The coffee shop has in the past hosted “Coffee With a Cop” programs, that foster communication between neighborhood residents and police.

Cops, thinking coffee cards with the president and cabinet members, with punch holes in their heads to simulate bullet holes is amusing? And cops are frequenting a satanic coffee shop, but they’re offended by idiots singing a song about pigs. Am I missing something?

Their initial page used to say they are going to continue to use the punch card. On the initial page was a Ram humanoid in a robe holding a scythe in its left hand, and a coffee type vessel in the right with characters (writing) on it, possibly of a satanic nature. (They appear to have a Halloween theme now).

Looking online, I found the following article about it. It has an image on the page of what appears to be hot coffee being poured into a woman’s eye. The magazine describes various points of the establishment, art gallery (I can just imagine), stage, and other functions. In a quote from the linked article is the following:

When you walk into Black Forge the first thing you’re going to notice is the color scheme—black, lots of black. The second thing you will notice is the artwork; we double as an art gallery. Once a month we host a new artist and we cover every inch of our walls with as much art as we can. At this point, you’ve probably tripped over our stage because you were staring at the art; we’re a coffee shop by day and a music venue by night. We average anywhere between 20 and 25 events a month. Most events are metal shows;…..We also tend to put things on our shirts like Goat priests and people having hot coffee poured into their eyeballs. We’re metalheads that hail Satan and drink black coffee; we wanted to open a place for people like us…..

Oh, once a month the have a woman that professes to be “an artist, a witch, and a Tarot card reader” to come in to read Tarot cards. Overall, sounds like a wholesome fun place, not!

Police often boycott businesses for stupid things their employees say, and I’ve supported those boycotts if the management is unwilling to address the problem. In my humble opinion, it is not appropriate for the Pittsburgh Police to continue to patronize a satanic themed store for the convenience of buying coffee, an understandable police, fire, and paramedic staple. Republicans, Conservatives, or Christians should not visit the coffee shop either.

A clown mask of obama worn by a performer brought hard times to it’s wearer, and feigned indignation by liberal news media in America and likely overseas. But from what I’ve read, the performer did that for previous presidents too, but no indignation then, and there should not have been any during obama’s years in the White House.

But police, and teachers (this blog was written in response to this…..):

…..should know better. Again and again, suggested violence against Conservatives and their leaders is largely ignored, and we’re inculcated not to mock liberals in similar ways.

Working in “the mill” for 25 years, rest assured coffee is a staple there too. Big shops of men and women, working a dangerous environment, around the clock makes coffee a necessity. But the “coffee clubs” that exist are funded by minimal weekly contributions, and coffee is made by the urn full to suit upcoming shifts. In protest, police could have done the same, start a club, get weekly contributions, avoid the coffee store. We should not sanction suggested acts of violence against anyone.

2 thoughts on “Suggested Violence Against Conservatives”