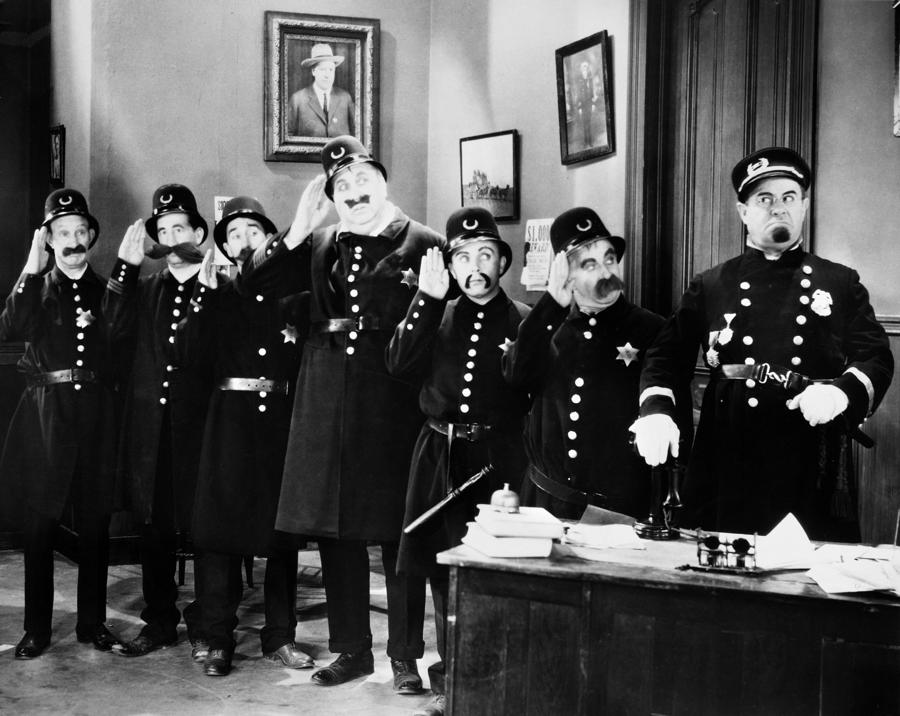 A Blog Entry I published several years ago, police were aiding antifa by stepping down, they aided them by not arresting them for acts of violence or exposing their face to being videoed for later use in prosecution, they, in more than effect, aided and abetted antifa. At the time, they betrayed people, Conservatives, that held police nearly as esteemed as saints. Police, collectively, have brought this latest series of riots on themselves. Why did police departments and the police union; by extension and lack of a political stance against having officers stand done; support antifa? Because antifa is, in my opinion, part of the democrat party and police won’t oppose the DNC. Orininal Blog Entry appears below:

Rather than complicate this blog entry with my typical well meaning but sometimes abstruse comments and concerns, let’s jump right in.

Tucker Carlson is actually addressing the dishonor of police standing down and/or arranging for riots by channeling opposing protestors together. In Charlottesville Virginia, 3 people were killed by this foolishness, 1 female protestor and 2 police officers in the helicopter crash. These videos may be short lived, someone with pull is having them removed, but I’ve seen this before with Fox material.

And the tragic irony? By the police wearing tutus and being a lackey for the politics of select towns, they have endangered their brothers and sisters in uniform as well as everyone else, so the tragic death toll may still climb, officers killed by antifa, BLM, etc, terrorists emboldened by previous encounters with police where the terrorists tore down statues and attacked Trump supporters while the police looked on and did nothing.

Fortunately the Phoenix Arizona Law Enforcement performed admirably, did their jobs, backed the protestors away. Great job. And other police departments have done similarly, but too many police in towns and cities are nothing but marionettes for anti-Trump politicians, and these officers are disgracing, and endangering, the uniform.

And the police unions. Silent. Yet let some idiot kid with an IQ of 60 refuse to serve an officer at a fast food store, suddenly the police union’s voice can be heard around the world denouncing the individual, store, and corporation.

Berkeley Police Refuse To Stop the Riots – When Told People are Being Beaten, Officer Says “…and?”

Published on Apr 16, 2017 HELP US PREVENT THESE STAND DOWN ORDERS:

Enough is Enough, we must #UnleashThePolice

Berkley Police asked why they aren’t defending law-abiding Free Speech activists as Antifa terrorists beat them in the streets.

Free Speech Activist: “Why are you hanging back?”
Frustrated cop: “That would be a good question for Chief of Police”

Reporter contradicts police chief on stand down order in Charlottesville

Published on Aug 16, 2017 It’s looking more and more like they wanted a fight between these two groups. It mirrors what we saw in Berkeley where ANTIFA thugs were given free resign to commit violence. Looking at the mayor’s twitter feed, he appears to be very anti-white.

The above paragraph is from the description of a video that accompanied it, but is “Not Available” any more, not removed, not that the account was terminated, it is “Not Available”. This video was available here for months, though, and I’ve seen it many times.

The same video was discussed in a Reddit Thread, but the thread is Quarantined (I’ve never seen that used before on a thread) due to violations of Truth, Justice, and the American Way, i.e. a cop somewhere behind the scenes probably had the thread Quarantined. I’m sure they don’t have the original Tucker Carlson show, but the comments would be worth seeing.

Offhand, I’d say the police, the FBI, and DOJ, largely, are conspiring with the left, democrats, and communists, to destroy Conservatives, Republicans, and America. That’s truly despicable. In FEW MAJOR CITIES have police ACTUALLY PROTECTED Conservatives and Republicans. And the sliding scale of good and evil must be addressed by politicians, Martha Stewart goes to prison for lying to the FBI, but what many of us think, the FBI conspirators to overthrow a presidency, actually a government, and lying to America about it, and Hillary’s violations of Classified Data, go un-prosecuted.

Due to corrupt police, we’re now living in conditions that rival Mexico and Latin and South America. Tentatively, on a new story, Police Failed to Protect Conservative Journalists, in Austin Texas, resulting in physical injuries to a Journalist and a Guard.

The Link Below is from a 24  February 2020 Article. Despite the older examples cited elsewhere in this post, these activities apparently are still going unchecked.

⬇ #4. Trump Supporters Sue San Jose Police For Failing To Protect Them From The Alt Left

Published on Aug 17, 2017 During the 2016 presidential election violence erupted at a Trump rally in San Jose CA with Alt Left protesters attacking peaceful Trump supporters. What caused quite a stir was the reaction of local police, who chose to stand down and not arrest the alt left attackers. Now, thankfully to a very based lawyer featured on the Tucker Carlson show, the city and police are rightfully getting sued.